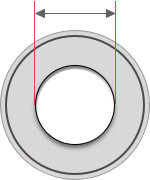 Thin Section Bearings
Thin Section Bearings as listed below are available open, shielded or sealed. Available in a variety of standard and custom inch and metric sizes, our thin section bearings offer high performance in corrosive and non-corrosive environments where space devoted to bearings is at a minimum. LILY interchangeable from Kaydon The bearing interchange chart is meant to be a quick cross-reference guide.

Flanged Ball Bearings
Flanged bearings have a solid steel flange on the outer ring. This allows the bearing to be more easily located in a housing. The flange can also help to prevent axial movement of the bearing in the event of a thrust load on the bearing. It is easier to maintain the position of a flanged bearing in the housing where a lot of vibration is present.

Self Aligning Ball Bearings
Self-aligning ball bearings have two rows of balls, a common sphered raceway in the outer ring and two deep uninterrupted raceway grooves in the inner ring. They are available open or sealed. The bearings are insensitive to angular misalignment of the shaft relative to the housing , which can be caused, for example, by shaft deflection.

The order is added successfully. You can click order to pay or view